because Sanity is not Statistical
https://forum.mindistortion.tv/

by Guitar_clock
I'm building. I plan to purchase within 4 weeks. Prices could change during that time (hopefully they steadily drop). Any help would be much appreciated. I plan to keep the budget even if these components drop in price, allowing me to upgrade the components 4 weeks from now at my time of purchase.

Total for complete build:
~$1506.00
Prices listed by time of purchase

by HeRetiK
nice setup. SSD + Win 8 should give you a smooth boot time.

i personally got myself a GTX 670 by Asus a few weeks ago, a friend of mine has been considering a 4GB version of the GTX 670 for his 3D modelling rig. the GTX 660 Ti should work more than fine though.
by Azgarth
looks good overall. few questions.

why such an expensive motherboard?
how much does noise matter? otherwise you might want a better cooler.
why did you choose that ssd? the crucial m4 is cheaper for example.
one of the major things i'm missing is the monitor. for quality video work, you really want a good one.

all in all a good rig, seems to err on the side of overqualified though, but that never hurt anyone.
by Guitar_clock

HeRetiK wrote:nice setup. SSD + Win 8 should give you a smooth boot time.

i personally got myself a GTX 670 by Asus a few weeks ago, a friend of mine has been considering a 4GB version of the GTX 670 for his 3D modelling rig. the GTX 660 Ti should work more than fine though.


I badly want a 670, and hope the price comes down a little by next month. Why, well, 'cause I'm still a gamer at heart. I'd be hitting two birds with one stone if I got a machine that could also play next level games.

@Az
I don't know. Originally I had a $200 Asus P8Z77-V Pro as my choice (because I may want to do OC'ing) but someone on reddit buildapc suggested the MSI board to save cash.

Noise matters. I don't know where to start when buying coolers. I thought just any aftermarket cooler would be quieter than the stock one.

I am also unsure as to what to go with for SSDs.

I'm working with an asus 21" monitor for now and with time and money I'll probably get a 23" or greater monitor for better timeline workflow. One monitor can really get in the way with that stuff.
by Azgarth
most motherboards these days have okay overclocking, these special overclock boards are either for real enthusiasts (think pushing the envelope, rather than for practical purposes) or, more commonly, just to get you to shell out more money than you actually need. where motherboards are concerned these days i'd go for the cheapest motherboard i could find that supports what you need (i.e. sata 6 gbit/s, usb 3.0 etc) and is overclock capable (rather than specifically designed for it), it should be all you need.

as for coolers, last i checked the scythe mugen 3 was doing pretty well, and the scythe katana, scythe grand kama cross rev B and thermalright TRUE spirit 90 are also very good.

you might want to look into fans as well, usually aftermarket fans run quite a bit more silently than their stock counterparts. they all fit, provided you get the right diameter. i've two rigs at home, both are quiet. you can't hear them in an empty room. the quietest runs on a single 120mm casefan on the cpu cooler, and has a passive gpu cooler.
speaking of same, that will probably be by far the noisiest component, unless you put on aftermarket cooling or find a quiet version. i'm not as up to date on gpu coolers at the moment, but i could dig into it.
aside from the cooler (and there's only a couple cards specifically made with them in mind), which graphics card you get (from the same series, say your 660 ti) really don't matter, pretty much all brands are decent, and stay pretty close to the original designs.

ssd, you should be able to get a crucial m4 (256GB) SSD for roughly $160, that's what they run for around here, at least. the m4 has proven reliable, and while it's not the fastest ssd (though far from the slowest either), you won't need it to be. ssds are are miles ahead of the old spinning disc stuff, and the difference between one ssd and another is much smaller than that between any ssd and an 'ordinary' hdd.

monitor wise, DON'T buy a TN panel monitor. check for the color stats before you buy any monitor. anything over 100% is trash, but coming close is good.
digitalversus.com is basically my preferred go-to for checking on monitors.
by HeRetiK

Azgarth wrote:monitor wise, DON'T buy a TN panel monitor. check for the color stats before you buy any monitor. anything over 100% is trash, but coming close is good.
digitalversus.com is basically my preferred go-to for checking on monitors.

I second that. TN Panels are great if it comes to response time, but color-wise... not so much. Other technologies, like IPS are way more reliable in these terms. It definitely pays in terms of color-fidelity, but for fast paced games it can be annoying.

If going for a dual set-up, keep in mind that there's nothing that keeps you from using your old monitor as secondary. Having a proper one for color correction and a mediocre second one for various tools and secondary applications can work out quite well.
by Azgarth
eh, only a handful of people are bugged with sub 6ms latency times. even 8 can be doable. IPS has that pegged these days. not the greatest, but still good enough.

you might want to invest in some tiltable mounts for your monitor, as well (wall, table, or ceiling mount, whichever works for you), there's plenty these days, and all monitors support the VESA mounting system.
by Guitar_clock
Thanks for all the help, this is good.
by Guitar_clock
OK, so I got a little antsy and went overkill. Nothing wrong with that!

I chose the mobo because I wanted on-board Wi-Fi, liked the color scheme and having a lot of USB 3.0 ports, and heard it was helpful for OC'ing.

The video card I was just like meh I want to play videogames.

I nixed windows 8 because I've heard it's hard on workflow.
by Azgarth
you can wreck out all the metro stuff and have a slightly improved win7, but... yeah. you'd need start8 and the like though.
by Guitar_clock
I don't know if they have this adage in the rest of the world, but in the U.S. it goes something like this.

There was reason to upgrade from XP to 7 but not to Vista. There will hopefully be reason to upgrade from 7 to something in the future, but it won't be 8.
by HeRetiK
clever boy.
by Guitar_clock
$81 - Corsair Vengeance 16GB (2 x 8GB) DDR3 SDRAM 1600 - Purchased
$120 - 2x Western Digital Blue 1TB 3.5" 7200RPM Internal Hard Drives - Purchased
by Guitar_clock
Cpu and Cpu Heatsink Fan purchased 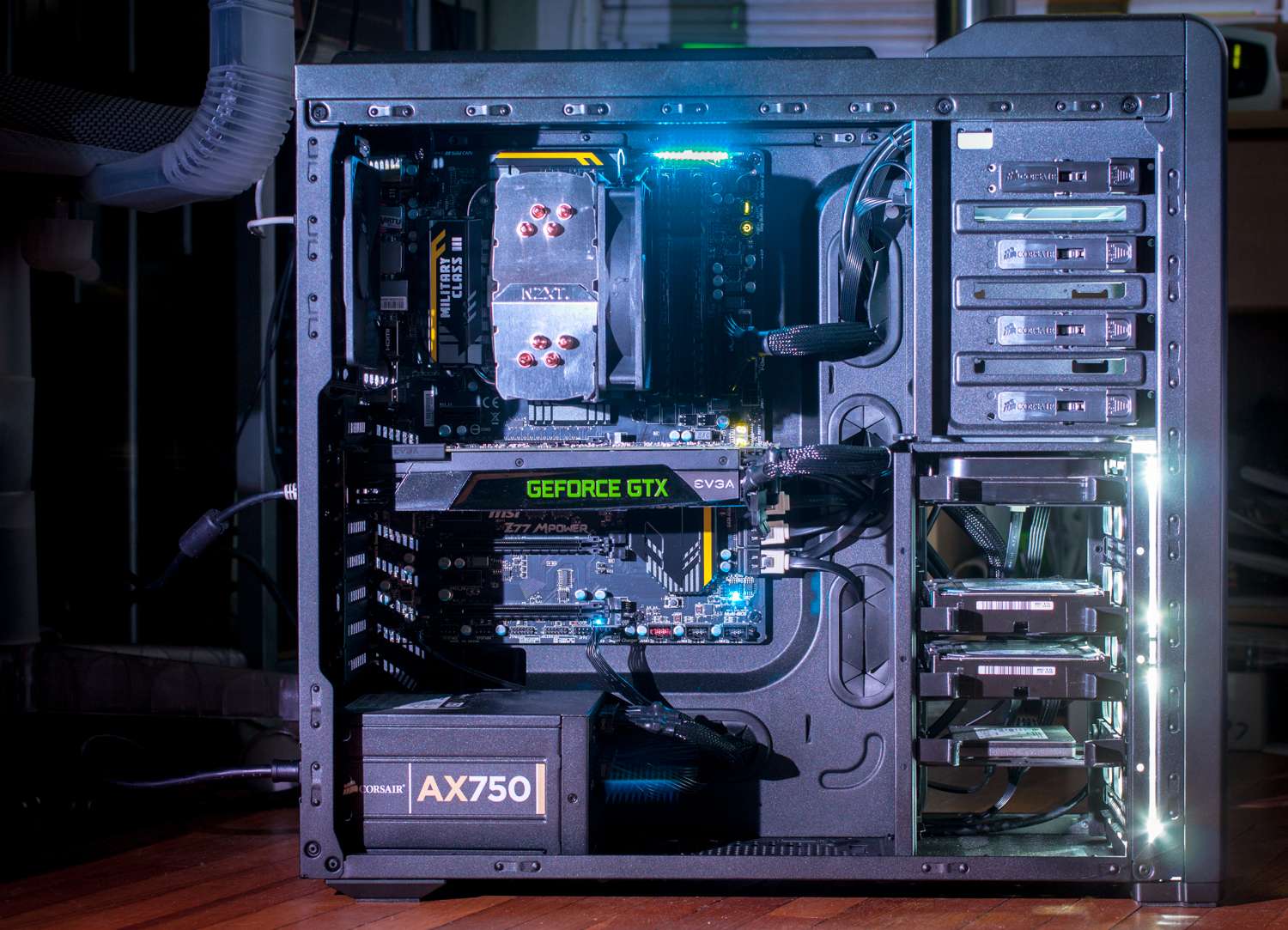 by HeRetiK
Sexy hardware is sexy.
All times are UTC
Page 1 of 1
Powered by phpBB® Forum Software © phpBB Limited
https://www.phpbb.com/