Yah I know that most of you won't celebrate christmas until the 25th.
However where I live, one celebrates christmas on the 24th. And for some reason I sort of feel a bit of christmas spirit inside of me. (might also be gas. ha ha. worst joke ever). So MERRY CHRISTMAS MD!!! Woooohhh!!!

Also, on a sidenote: The american tradition of Santa Claus sort of killed our Christkind - which is basically Baby Jesus floating in through the window and bringing your presents. But you know, it's kinda hard to market a semi-naked baby child on the street.
love the system
Top

Happy Solstice, MD.
Is there a promised land
Or am I on the journey going to nowhere?
Are the streets paved with gold
Or am I slipping on the mold that slowly grows there?
DevilDriver - Monsters of the Deep
Top

If you think about it, saying x-mas is blasphemy:p An x represents a turned cross:P In your face, Christ:P (No blasphemy meant)

Voly wrote:You just earned back all the many, many points I've taken away from you (mentally) since you've been here.

No, X is the abbreviated Greek for Christ, so it's perfectly right.

I refuse to fake happiness for the sake of this comerciallized holiday, but I hope everyone enjoys it.
Life's a road with many turns,
to make it through you first get burns.
Cuts and scratches, thrusts of steel,
but only through this can you feel.
Top

Was gonna get pissy and say it isnt christmas yet, but alas! My knowledge of culture fails me!

We just had the Christmas dinner. I feel like my first Christmas present will be diarhea, cause we ate deer steak with cranberry sauce, sweet cream and Refošk (our red wine); one weird combination of shit. Have to stay up, cause we always go to church at midnight and for mulled wine afterwards. Are people of non-catholic religion hypocrites for celebrating Christmas? Kind of confusing.
Feel my hands around your throat.
Top

Also, me gots money for buying a climbing harness & climbing shoes! Woooh! On a second note I kind wait to exchange presents with my friends, as I haven't been able to do so yet.

It's usually depicted as a baby boy

... I did actually laugh at Heretik's joke up there. Am I simply festive, or.. let's not.

I actually got my "main" present a month ago; a very sharp looking suit. Just as expected, I collected the newest edition of Guinness World Records Book today. Somewhy it has become a tradition to receive one, and I have each book from 2000 - 2009

Also, I got some other books, clothes, homemade stuff from my sister, and of all things towels. For my parents my sister and I bought a digital photoframe.

What sucked today is that I somewhat got the impression of that my stepfather thought that I didn't appreciate what I got, which is totally weird since I am very grateful for everything I received (except the towels from my uncle

). It's the worst feeling in the world to know that someone got a wrong impression of you by no rational reason you can think of. I mean, I thanked them and meant it. Since I am a grown up now, I got to choose an expensive gift for myself, and I see absolutely no reason for why he would think that I am acting like a unpleased and spoiled kid. Damn it, when I lived in Russia with my mother and father we were poor by western standards, and it's not like I don't remember. I'm not complaining about the past, au contraire, it was terrific. All I'm saying is that I know the value of material things, and I'm equally thankful when I receive them. Even though he didn't say anything directly I could clearly read him. Yeah, I've done nothing wrong, but I can't help feeling guilty for whatever way I may have wrongly expressed myself and how he possibly misinterpreted it. Damn it, I'm such a pussy considering how much of a douchebag he sometimes is. When the hell did I get afraid to offend people?

Fuck, this really looks like a blog, doesn't it?

Also, me gots money for buying a climbing harness & climbing shoes! Woooh! On a second note I kind wait to exchange presents with my friends, as I haven't been able to do so yet.

It's usually depicted as a baby boy


Awesome! I tried climbing and bouldring with a bunch of people from my class not too long ago, and it was great. I quickly found out that all the time I've spent on pumping my back and arms up is useless since my fingers are too weak to keep the grip safely (at least when bouldring).

The Russian Santa, just like Russian priests, is much more pimp than anything else. He looks like something out of Narnia or LOTR. Ded Moroz literally means "Grandpa/Old man Frost". 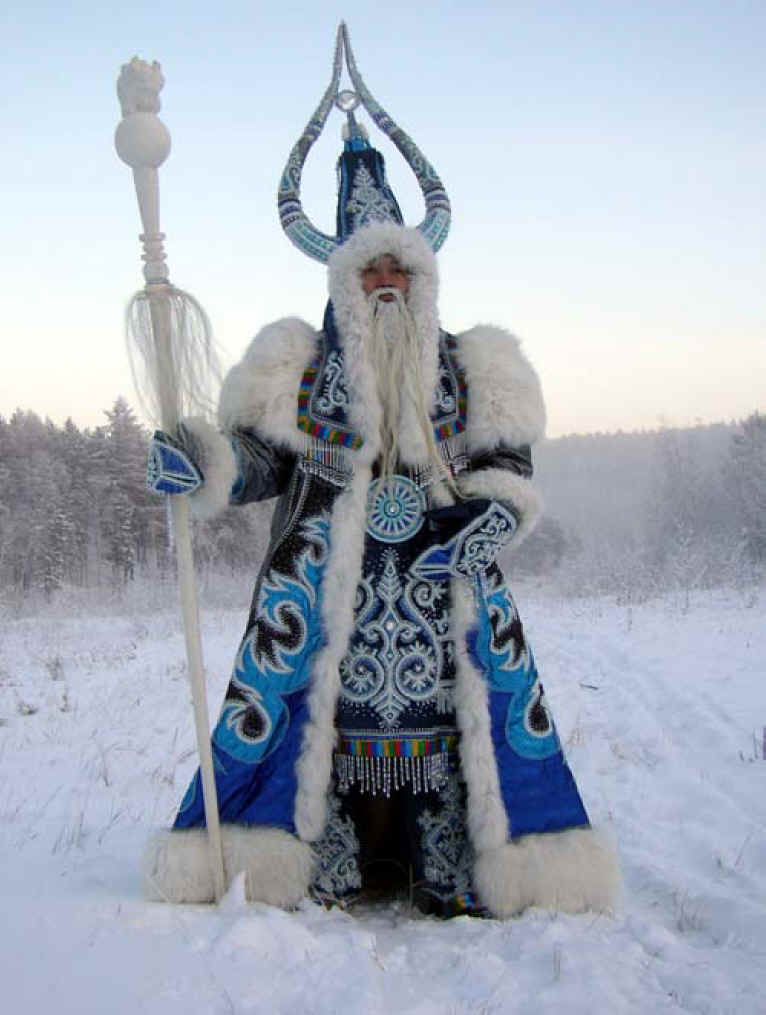 since it is now officially christmas in the UK..

MERRY CHRISTMAS MOTHERFUCKERS. have a good one.
Top

You guys are doing it wrong.

But then again in Russia we usually got presents on new years eve.
Top

Lol... yeah I forgot that in Russia Christmas is celebrated a tad bit later.

Btw, in Austria we do have something like Santa Claus (Called Nikolaus), but he visits on the 6th december and only brings small presents (like apples or whatever). If you were good, that is. If you were bad, on the other side, you'll have a stern talk with his fella, the Krampus (in this case it seems like the Krampus brought a friend)

@Bouldering & Climbing: Don't forget that technique is key. You can save a lot of energy by knowing the right tricks. Not to say that I'm really able to apply these yet :X
love the system
Top

I want a Krampus for Christmas. And ol' Niko up there has the fakest looking beard I've ever seen.

I got some kickass speakers and a sub for xmas! Altec Lansing ftw!
Aut Viam Inveniam Aut Faciam.
Top

So far I got a Boondock Saints shirt and a wallet, but thats just my girlfriend and sister's presents. I'm waiting for the motherload tomorrow.

Can you say I get my XBL Gold back? I sure can. 13monthlivecardyay:)

I hate Christmas. Work made me hate it.

I think this year my family gave up on Christmas. No festivities, no presents under the tree (no, it's not because of the shitpot economy). We're all overworked, and overstressed. I'm sleeping in tomorrow.

It's kind of sad, when you think about it, but it's also kind of liberating.
Under construction. Or something.
Top

'Twas the night before Christmas, when all through the house

Not a creature was stirring, not even a mouse;

Black stockings were hung by Ardy and HeretiK with care,

In hopes that St. Nicholas soon would be there;

The noobies were nestled all snug in their beds,

While visions of Happy Bunnybuns danced in their heads;

Frosty and Anarch no longer quarreled

Because Burned had warned them that the matters no longer mattered.

Myr and Voly were fast asleep,

Voly high on life, and Myr tripping on acid quite deep.

Davion had bought every blanket to be sold,

For he was far north, fighting the cold.

Chara and Daemon helped in the tree's ornament,

They were thanked greatly for their sentiment.

Faust had gone to bed early this night

Because he scorned the idea of giving joy and life.

Kex had locked her door, and her windows, and placed cameras facing the glass,

Since earlier that night she had shoved an object up Wayne's... Inbox.

Shoshie, Sombra and Rainboo snuggled with their teddy bears

And Eschatos snuggled ever more with his girlfriend's ass hairs.

Kristinadot and Stalker dreampt of new dresses in morning,

As ProjectTorn saw visions of vacation from working.

Azgarth and Morph were just covered in blankets,

Mob and TGD surrounded with armaments.

And ERQ in her 'kerchief, and I in my scarf,

Had just suited up to dig out our cars,

When suddenly on the boards there arose such a clatter,

I sprang from the hallway to see what was the matter.

Away to the Index I flew with a dash,

Typed in the password and scrolled down to Flash.

The moon on the breast of the unread posts,

Gave the lustre of mid-day to objects below,

When, what to my wondering eyes should appear,

But a miniature sleigh, and eight tiny reindeer,

With a little old driver, so lively and quick,

I knew in a moment it must be St. Nick.

More rapid than spambots his coursers they came,

And he whistled, and shouted, and called them by name

On, Comet! on Cupid! on, Donder and Blitzen!

As old posts that before the wild hurricane fly,

When they meet with an obstacle, mount to the sky,

So up to GD the coursers they flew,

With the sleigh full of lolcats, sex toys, two girls and St. Nicholas too.

And then, in a twinkling, I heard on the roof

The prancing and pawing of each little hoof.

As I drew in my hand, and was turning around,

Down the chimney St. Nicholas came with a bound.

He was dressed in human skin, from his head to his foot,

And his clothes were all tarnished with spam and soot;

A bundle of cats he had flung on his back,

And he looked like a demon, eyes ever so black.

His eyes -- of the depths! his dimples how angry!

His droll little mouth was drawn up like a bow,

And the beard of his chin was as white as the snow;

The stump of a pipe he held tight in his teeth,

And the smoke it encircled his head like a wreath;

He had a broad face and a gigantic belly,

That shook, when he scowled like a bowlful of jelly.

He was chubby and plump, a right mean old elf,

And I laughed when I saw him, in spite of myself;

A wink of his eye and a twist of his head,

Soon gave me to know I had everything to dread;

He spoke not a word, but went straight to his work,

And filled all the stockings; then turned with a jerk,

And laying his finger aside of his nose,

And giving a nod, up the chimney he rose;

He sprang to his sleigh, to his team gave a whistle,

And away they all flew like the down of a thistle.

But I heard him exclaim, ere he drove out of sight,

"Happy Christmas to all, and to all a good-night."

Ahhh, if only. *wistful sigh*

GC, that was brilliant. Congrats (:
Feel my hands around your throat.
Top

Merry Christmas to all!
Top

LOVE THE MONGOOSE.
For all we know humans are just weapons created by the world.
Yonaka Sanryu - This thread makes the EMOs slit their wrists.

Users browsing this forum: No registered users and 30 guests