Yup, just some random art of mine. Enjoy.

Note: I don't have any fancy drawing stuff, so all of my art is done with my mouse on chickensmoothie.com 's oekaki with the built-in art tool, or with mspaint 2003. On a rare occasion I use xat chat's doodle, but hardly anything will be from there. Also, some of the chickensmoothie stuff will have the art signature "steampunk" that's because that was my username there. 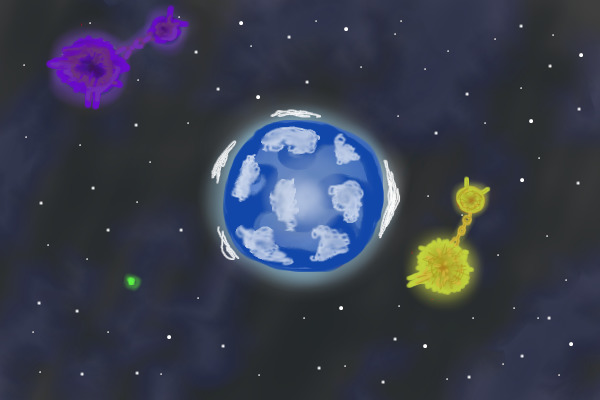 My first attempt at drawing some lineless art. It's Skaia, Prospit, and Derse. 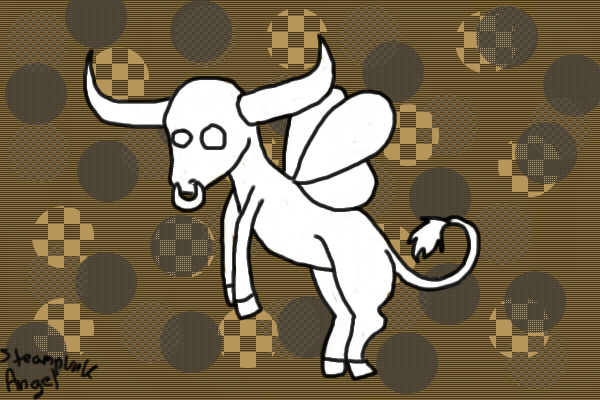 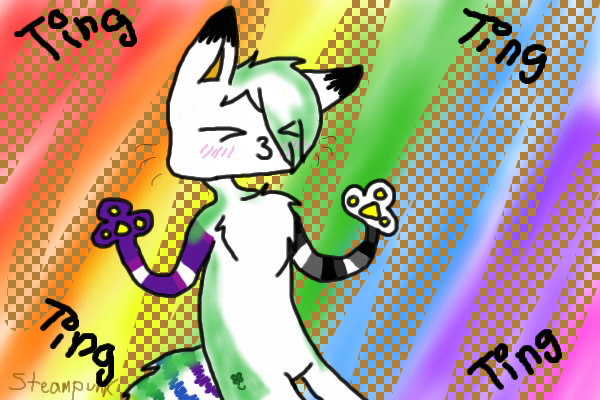 LET'S DO THE FORK IN THE GARBAGE DISPOSAL!

Random anthro. Eeeeyup. This is my most recent doodle. I'm getting better! ^-^
It's a day full of gloom when::
- An artist can't find a clean pallate
- A writer lost their beloved journal
- A musician's sheet music blew away
- A singer lost their voice
Top

My editing experience leans more towards literature than artwork, but here we go:

I'm...actually not horribly disappointed. Granted, it's not going to be going in any museums anytime soon, but it's much better than I expected, especially when it was deemed fan-art.

The lines are cartoonishly shaky at some points and rather uneven in others. Not horrifyingly bad, and I'm assuming working with a better tool than a mouse would clear a large part of that up.

I am noting a heavy reliance on centering to place focus; I'm not feeling a whole lot of placement of value, importance, or attention because of it. Generally, pieces that are placed with their main focus centrally aren't as striking as pieces that are slightly weighted. While it depends largely on the subject matter, I haven't recently seen a piece with a centered focus (that turned out well) without some kind of focus on balance, duality, ect. While the Skaia-and-Moons piece works somewhat off of the sense of balance, it does so, both in a way that is uninteresting, and in a way that is, in fact, not visually balanced; your Prospit seems to have fallen into low orbit, actually. Otherwise, only the third piece isn't directly centered, and even it is still centrally focused.

I'm rather impressed by the use of color in the first one, but kind of appalled by the last two. There is no good reason, as far as I can tell, for the backgrounds to blare at me, for the cat to have a strange, multi-colored and oddly lopsided fur pattern, nor for the anthromorph to be wearing a rainbow scarf. While the content itself isn't what I'm looking at--that's unrelated to this critique--it does need to justify these additions if the style, materials, and intended audience do not. And I don't feel like any do. It's not so bad on the last piece--at least the colors are largely subdued--but especially the third one seems like this palette adds little to nothing to the subject.
However, on the flip of that, I am very impressed by the spacial scene around Skaia-and-Moons. I would imagine there would be somewhat more color alteration because of various spatial phenomena, but it is still colored so that it naturally coalesces in the corners of the vision to form a sturdy background, but also shaded strongly enough that the strokes draw the eye. Use this to direct vision as your skills progress; subtle things like that are very powerful.
(Side Note: There aren't any stars around Skaia-and-Moons, I don't think.)

Before this just gets ridiculously long, I would like to make one last note. I'm finding myself strongly attracted to your use of shading and lighting; you seem to have a strong grasp of it (albeit one strongly resembling Hussie's own) and know the general applications of using it to draw attention (centering the glow in Skaia, encompassing it in dark, then a glow; very attention-grabbing), I would like to point out that I can't imagine a single way that a light source would put a shadow both on the tale and the inner thigh of the anthromorph unless her buttock protruded in a tumorous addition just out of vision.

That all said, I don't want you to be discouraged. Especially if this is something you're passionate about; for everything I pointed out that needed improvement, realize I picked it specifically because it could be improved on. While I'm sure you would love compliments, and you do deserve some, they wouldn't help you quite as much as direct notations of where one humble observer thinks there is room to grow. And I would encourage you to do so; not only should you continue practicing this "signature" style, I would also encourage you to attempt new styles, subjects, and materials in order to better learn those styles, subjects, and materials, but also to learn your own art and your own self better.

And, despite what everyone will tell you at one point or another, it is worth the effort. You should never regret nurturing a talent; the world is too full of those with only skill in menial labor and belittling.

Voly wrote:You just earned back all the many, many points I've taken away from you (mentally) since you've been here.

I don't mind that you talk a lot, it definately helped! ^-^

The second to last drawing was just a silly doodle I did in 10 minutes or less, so don't pay that one much mind at all. She is my fursona, and also a fennec fox, hence why the tail is so fluffy. Many people comment on her being a sparkledog, and I... guess she is? But that being said fursonas are supposed to resemble you in an animal form, and I am a colorful person, so the strange colors only seemed right. (I don't mind sparkledogs/animals unless the colors REALLY clash and they are wearing a shitton of accessories. ;P )

As for why the anthromorph is wearing a scarf-- it's just a kind-of signature thing I draw on some of my animals. There really isn't a reason or purpose for it other than scarves are cool. :3
It's a day full of gloom when::

- A writer lost their beloved journal

- A musician's sheet music blew away

- A singer lost their voice
Top

Doodles. The first one is the only one with atmosphere, but you got the clouds wrong. They don't protrude so far away from the surface.

Also furries are gay.
Edit: more accurately, fetishes create a barrier for closeness between people. Artistically I want more than just a figure. Give me a background... anything.
Top

GC, you have no idea what the first one is of, and furries are not gay. Also, I suck at backgrounds so I do not make them.
It's a day full of gloom when::

- A writer lost their beloved journal

- A musician's sheet music blew away

Users browsing this forum: No registered users and 2 guests